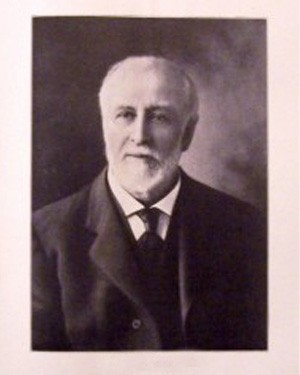 “The history of Edwin Alonzo Sherman is not merely the record of business successfully conducted, for in the midst of an active life he has found time to cooperate in many movements that have had to do with the material upbuilding and the intellectual and moral progress of the city in which he makes his home. Life has always meant to him opportunity, and enterprise, determination and progressiveness have with him, as with many others, spelled success.

Mr. Sherman in a native of Massachusetts, his birth having occurred at Wayland, Middlesex county, on the 19th of June, 1844, his parents being Calvin and Lucy P. (Parmenter) Sherman, of English and French ancestry respectively. The paternal immigrant ancestor was John Sherman, who came to the United States in 1630 and was one of the first professors of Harvard University. He was the father of twenty-one children.

Reared in his native town, Edwin A. Sherman passed through consecutive grades in the public schools until graduated from the Wayland high school when sixteen years of age. He afterward spent four years in farming and after reaching man’s estate he left home and went to Boston, where he secured a position as a clerk in an oil commission house. His fidelity and capability are manifested in the fact that after two years he was admitted to a partnership under the firm style of Capen, Sherman, and Company, but failing health caused him to retire from the firm four years later, and, thinking to benefit by a change of climate, he made his way to the northwest. During the succeeding winter he engaged in teaching school near Sioux City, Iowa, and in June, 1873, he removed to Sioux Falls, South Dakota, where he has since made his home. With the history of the city he has since been closely identified and his forty years” connection therewith has been a period of notable growth and upbuilding to the city. Soon after his arrival here he purchased a half interest in the Sioux Falls Independent, a weekly republican paper, then published by C. W. McDonald. He devoted a year and a half to journalism and then sold his interest in the paper to T. J. White. He was superintendent of schools of Minnehaha county from 1874 until 1876, and while filling that position organized most of the school districts in the county. His efforts in behalf of education were far-reaching and beneficial and the impetus which he gave to the cause of public instruction is felt today. Eventually he turned his attention to the real-estate business, in which he has since operated, and along this and kindred lines he has contributed in large measure to the improvement and development of the city. In 1875 he erected the first brick building in Sioux Falls, the third building on Phillips avenue south of the Edmison-Jameson block. In 1877 he purchased what is now the Cascade milling property, comprising five acres of ground, and became associated with Isaac Emerson and J. G. Botsford in the building of the stone dam and the Cascade mill. Later Mr. Botsford sold his interest to George B. Wheeler. In 1887 the scope of the business was extended to include the purchase and operation of the electric light plant, and in that year the Cascade Milling Company was incorporated with a capital of one hundred and fifty thousand dollars. This business has been continued uninterruptedly and is one of the foremost productive industries not only of Sioux Falls but of the southeastern section of the state.

In every connection Mr. Sherman has proved himself to be a man of sound judgement and unfaltering enterprise and at all times his labors have been of a character that has contributed to public progress as well as to individual success. He has built a number of business blocks and fine residences in Sioux Falls. In 1878 he erected a stone building on the southeast corner of Main avenue and Ninth street and also erected all of the buildings east to the alley on Ninth street, as well as many of the buildings south on Main avenue. In 1883 Mr. Sherman erected the building which was occupied as the post office until May 18, 1895. The Cascade block was erected by him and also the Union Trust Company block. He platted what is known as Sherman’s addition to Sioux Falls and theron erected a commodious, substantial and attractive residence. At all times he has recognized the possibilities of the city and utilized his opportunities for promoting its growth and development, and his labors have been far-reaching, effective and beneficial. In 1886 he was instrumental in organizing the Minnehaha National Bank, of which he became the first president, continuing in the office for two years. In 1887 he organized the Union Trust Company and, resigning from the presidency of the former institution, concentrated his efforts upon the management of the latter, which soon afterward transferred it banking business to the Union National Bank, of which he also became the president. In 1887 he became associated with John M. Spicer, of Willmar, and undertook the building of the Willmar and Sioux Falls Railroad under the direction of James J. Hill, of the Great Northern Railroad Company. Together Mr. Sherman and Mr. Spicer located, named and platted all the towns along the line for a distance of one hundred and forty-nine miles. Mr. Sherman is a most resourceful man, who throughout his business career has recognized and improved opportunities which others have passed heedlessly by. Moreover, he has the ability to coordinate forces and to bring into a unified whole seemingly diverse interests.

A record of Mr. Sherman would be incomplete and unsatisfactory were there failure to make reference to his public service outside the strict path of business. His fellow townsmen, appreciating his worth and ability, have frequently called him to office and would have conferred him many other official honors had he not declined. He was elected treasurer of the territory for the term 1877-8 and on his retirement from that position was elected auditor for a two years” term. Again in 1881 the latter office was offered him but he declined. He was elected one of the first trustees of Sioux Falls after its incorporation as a village and he has done much effective work in behalf of public education as a member of the school board. He was one of the first city commissioners, having been elected in 1908, and in 1910 he was elected to represent his district in the state legislature. His political allegiance has always been given to the republican party and he has ever kept well informed on the questions of the day, supporting his position by intelligent argument and bringing to bear as a test of his political position the sound judgment of a practical business man. No more tangible evidence of Mr. Sherman’s public spirit can be given than the fact that he donated to the city Sherman Park. In November, 1910, he gave to Sioux Falls fifty-three acres through which the Sioux river flows. One-half is hilly woodland and one-half high upland, and since the gift was made the tract has been continuously used for park purposes under the direction of the city officials. It was appropriately named Sherman Park and Mr. Sherman has had charge of the development of the roads, bridges and buildings. The park is visited by citizens generally, also by people from the entire southeastern part of the state and from adjoining sections of Iowa and Minnesota, many coming from long distances to enjoy the woods, the picnic grounds and natural beauties of the place. During 1914 the attendance in July and August was estimated to be between four and five thousand each Sunday. The park furnishes boating, bathing, tennis and other sports and each year the facilities for these will be extended and improved. The uplands are laid out in walks, adorned with beautiful shade trees and the tract today has the appearance of a well developed park. Admission is free and the park is reached by street car line. The Minnehaha Country Club has been located on adjoining grounds and fine buildings have been there erected.

Mr. Sherman has been married twice. On the 15th of September, 1873, he wedded Miss Florence L. Cowdrey, of Melrose, Massachusetts, who passed away February 1, 1890, leaving two daughters, Jessie L. and Mabel F., the former a graduate of Wellesley College. On the 9th of June, 1892, Mr. Sherman wedded Katherine Elwell, of London, England, and they have a son, Philip F.

Mr. Sherman is an active member of the Commercial Club, of which he has been the president. The family occupy a prominent social position and their home is the abode of warm-hearted hospitality. In all the relations of life, public and private, Mr. Sherman has won the regard, confidence and goodwill of his fellow townsmen and of all which he has become associated. With him “life is real, life is earnest,” and he has found in the faithful performance of each day’s duties strength and courage for those of the ensuing day. Each step in his career has been a forward one, bringing him a broader outlook and wider opportunities, and long since has he reached a position where public opinion accounts him one of the valued, representative and foremost citizens of Sioux Falls.”

Mr. Sherman died at the age of 81 and was buried at Mt. Pleasant on June 15th, 1916. He rests in the family lot in Block 10, Lot 14 of the Cemetery adjacent to the lot wherein lies his good friend, Helen Gale McKennan, who’s obelisk appears on our home page.