Mt. Pleasant Cemetery, the oldest cemetery in Sioux Falls, was organized on November 25th, 1873 in Allen’s Hall. At the time, Sioux Falls was a village with a population of about 150 people. The most prominent residents of the village of Sioux Falls organized and signed the incorporation papers, including: Dr. Josiah Phillips, Nye Phillips, Col Thomas Brown, H.W. Lewis, Edwin Sherman, and more.

In 1874, A.F. Wood of Yankton, Dakota Territory sent a letter to the Cemetery Board informing them of land he had plotted with blocks, lots, and streets in east Sioux Falls. Funds for the land were raised by charging $10 for a cemetery plot, and collecting as much of the money upfront as possible from the 32 people who expressed interest. The initial 20 acres of cemetery land still bear the original street names of Chestnut, Lincoln, and Grant Avenue.

By the turn of the century, the cemetery land had been graded, water piped in, hundreds of trees set out, and shrubs and flowers planted. A large addition of land was purchased in 1902, along with 15 gifted acres, growing the cemetery to nearly 150 acres.

In 1924, the Glidden Memorial Chapel was built in memory of Daniel Glidden, a member of the Cemetery Board as well as a prominent business and civic leader. The Chapel, which sits near the entrance of the cemetery, is built of quartzite – the hard, pink stone that underlies the city of Sioux Falls.

By the 1950s, the cemetery had fallen into a state of disrepair. Burial spaces were sold by the managing Sexton for what he thought the family could afford, so the grass grew tall and the money to manage Mt Pleasant grew short. In 1959, to pay off debts and cemetery upkeep, the board decided to begin selling off a portion of land in the south part of the cemetery to the State of South Dakota. At one point, the Glidden Memorial Chapel had fallen into such a state of disrepair, that the doors were removed and it became a home to mowers, tractors, and grounds-keeping equipment. 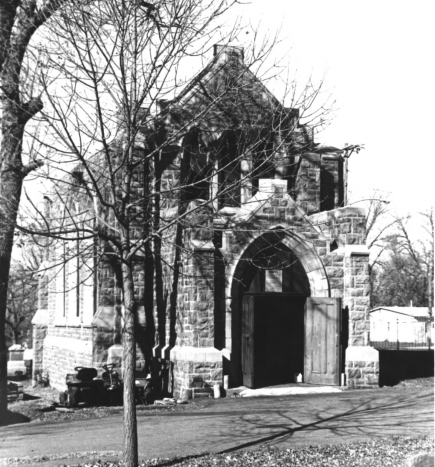 The present cemetery is comprised of about 52 acres, nearly 100 acres have been lost over the decades to development of the city of Sioux Falls. Although present burials umber nearly 20,000, Mt Pleasant Cemetery stills retains about 40% of burial space remaining.

Mt Pleasant Cemetery holds much of Sioux Falls’ history. Those buried here include people from every walk of life, including founders of the town, local legends, five volunteer firefighters of the Cascade Hook and Ladder Company, children from the South Dakota Children’s Home Society, victims of accidents and calamities occurring during the tumultuous years of Dakota Territory, and over 700 veterans of all wars, including more than 180 Civil War veterans. Grave markers range from simple wooden tablets and native boulders to monuments costing thousands of dollars. The oldest marker, which was moved from the Sioux Falls City Cemetery, is that of William Stevens, dated November 16, 1869.

Major efforts have been put into place in the last few years to bring the cemetery back to its place of prominence in the community. These efforts will not occur overnight, but will be slow and gradual in their implementation. A new section has recently been opened and the Glidden Memorial Chapel has been repaired and updated. As a reflection of the history of Sioux Falls from its beginning, Mt Pleasant Cemetery will continue to keep pace with the city of Sioux Falls into its future with new and innovative ideas for the coming generations.