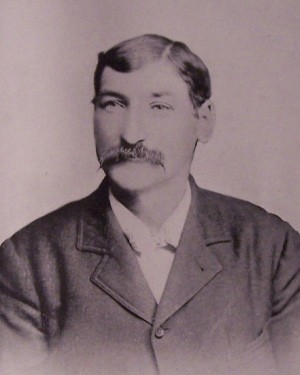 “Sioux Falls had not yet emerged from villagehood when Alexander R. Griffith became a resident of South Dakota. He took up his abode in the vicinity of the city and his later years were passed in the city, where he conducted business. He was born in Ohio, near Bladensburg, about 1846. He was the son of William Griffith, a farmer who spent his early life in Ohio and afterward removed to Iowa, where he also carried on agricultural pursuits. He married Sallie Wheeler, a native of Ohio, and it was subsequent to this that they went to Iowa, settling there during the pioneer epoch in the history of the state. Their remaining days were there passed.

Alexander R. Griffith was reared in Iowa and after reaching manhood was married in Grundy county, that state, in 1871, to Miss Sarah Wilson, a daughter of Jesse and Agnes Wilson. To this union were born two children: Agnes M., now the wife of W. F. Blood, one of the city surveyors of Sioux Falls and June B., the wife of Tom Moore, a druggist of Waterloo, Iowa.

In 1873 Mr. Griffith made his way northward to Sioux Falls, South Dakota, with the purpose of engaging in agricultural pursuits in this section of the state. He preempted a claim nine miles southeast of the town in Mapleton township, Minnehaha county; made the necessary improvements thereon; and in time secured the title to the property. He first erected a large frame house, two stories in height, and returned to Iowa for his wife, who shared with him in all the hardships and privations of pioneer life. After residing here for three years their house was completely destroyed by fire and Mrs, Griffith , with her baby, returned to Grundy county, Iowa, while Mr. Griffith erected a sod house, in which the family lived for some time. Encouraged by his wife, he decided to stick to the claim and began life anew. The present generation can scarcely realize the hard work and discomforts one had to endure during frontier days. Mr. Griffith continued the work of development and cultivation and wrought a marked transformation in the appearance of the place, which he converted into rich and productive fields, annually gathering therefrom substantial harvests. His sod house was replaced by a fine up-to-date residence, in which the family lived until 1900, when they left the farm and removed to Sioux Falls. Mr. Griffith owned one hundred and sixty acres of land and also cultivated additional tracts. Not a furrow had been turned nor an improvement made when the property came into his possession and he broke the sod, set out ten acres of timber and erected modern buildings. He was extensively engaged in the dairy business, making a specialty of butter making, from which he derived a substantial annual income. He also engaged in raising and selling hogs and followed general farming, the various branches of his business bringing him substantial success. When he removed to the city he sold his farm and here established a hack and carriage line. He owned a number of teams and conducted a good business, becoming well known in that connection.

Mr. Griffith held a number of school offices and the cause of education found in him a strong supporter. His political allegiance was given to the republican party and fraternally he was connected with the Improved Order of Red Men. He attended various churches but belonged to none. There were in him many sterling traits of character that gained him high regard and genuine friendship. On the 21st of January, 1911, he was on the sidewalk in Sioux Falls when a fractious horse dashed into him and knocked him down, fracturing his skull. He never regained consciousness and live but a few hours. He was a very popular man and his sad ending was a great shock to the community. Mrs. Griffith still survives her husband and resides at No. 617 West Eleventh street, where she has recently completed a fine modern residence.”

Alexander Griffith lies buried in Block 3, Lot 13 of the cemetery along with other members of the family.