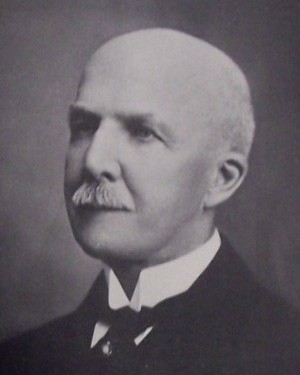 “Charles P. Bates, a senior partner in the well known law firm of Bates & Bates, was born in Florence, Oneida county, New York, December 4, 1859, a son of Rev. Laban E. and Caroline (Bronson) Bates, his father being a clergyman in the Congregational church. Mr. Bates was educated in the public schools and Genesee Wesleyan Seminary at Lima, New York, where he was graduated in 1881. He was engaged in teaching school, and in studying law in the office of J. & Q. Van Voorhis, at Rochester, New York, until May, 1883, when he came to the state of South Dakota and located at Ipswich in Edmunds county, where he was engaged in the hardware business with Elmer E. Parsons, under the firm name of Parsons & Bates, until March, 1885, when he returned to Sioux Falls and resumed the study of law in the office of Hosmer H. Keith.

He has always been active in civic affairs, and in 1914 assisted in reorganizing the Sioux Falls Commercial Club and was elected its president. He has been president of the Minnehaha County Bar Association, and, for a number of years, has been active in the South Dakota State Bar Association, having held important committee positions, including the chairmanship of the committee on legal reform in 1914.

He is a member of the various branches of Masonry, being a thirty-second degree Mason, a Knight Templar and a Shriner. He is also a member of Sioux Falls Lodge No. 262, of the Benevolent Protective Order of Elks; has held all of the offices in the subordinate lodge, was president of the State Association in 1914; was for three years a member of the judiciary committee of the Grand Lodge; and for two years chairman of such committee. He is also a member of Granite Lodge, No. 18, in which he has held all the official chairs, and has frequently represented his lodge in the Grand Lodge of the state. He is also affiliated with the Modern Woodmen of America and the Ancient Order of United Workmen.

On February 5, 1891, Mr. Bates was united in marriage to Miss Grace Chester, of Elmira, New York. They are the parents of two sons, Chester Bronson Bates, who is now engaged in the practice of law with his father, and Lawrence Russell Bates, who is a district agent for the Mutual Benefit Life Insurance Company.”