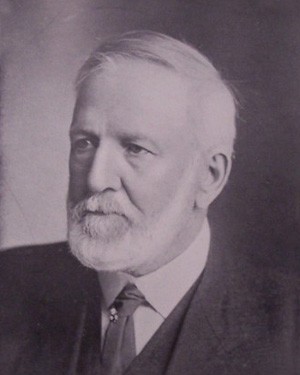 “Colonel Melvin Grigsby, of Sioux Falls, is recognized as one of the foremost citizens of the state of South Dakota. For a number of years he served ably in the important and responsible office of attorney general of the state and during the Spanish-American war he was colonel of the Third United States Volunteer Calvary, which he organized and which was known as Grigsby’s Cowboys. Moreover, it was due to his efforts that the formation of a regiment of United States volunteer cavalry was made possible. The initiative which he displayed at that time is characteristic of the man and of the west, where he has resided throughout his entire life.

Colonel Grigsby was born in Potosi, Grant county, Wisconsin, June 8, 1845, a son of William E. and Rhoda Grigsby. The father was employed in the lead mines near Potosi but when his son Melvin was four years old he removed to a farm two miles from the village and there the Colonel grew to manhood. His summers were devoted to assisting his father with the farm work and during the winters he attended school, which was held in an old log house. At the outbreak of the Civil war, although he was but a youth of sixteen, he desired to go to the front but his father thought him too young and sent him to school in Lancaster, Wisconsin. In the fall of that year Colonel C. C. Washburne went to Lancaster to recruit men for the Second Wisconsin Calvary. This made young Grigsby more anxious than ever to join the army and he at length obtained his father’s consent to enlist in Company C, Second Wisconsin Calvary, which was recruited at Patch Grove, Grant county, by Captain R. R. Woods. The other officers were: Myron M. Woods, first lieutenant; and D. C. Riley, second lieutenant, the former of whom subsequently became major and the latter captain. Colonel Grigsby was at the front for more that three years and experienced all the hardships of the war. He was captured and was imprisoned at Canton, Mississippi; at Cahaba, Alabama; Andersonville, Georgia, where he remained six months; and at Florence, South Carolina, from which place he escaped on the 10th of January, 1865, reaching Sherman’s army on the 1st of February. He escaped once and was recaptured, but finally succeeded in getting away. The story of his escapes, together with his experience in rebel prisons, has been told by himself in a book entitled ‘The Smoked Yank.’

After the conclusion of the war Colonel Grigsby entered the University of Wisconsin at Madison, where he remained for one year, and later became a student in the State Normal School at Platteville, from which he was graduated in 1869. He was for a year principal of the schools of Horicon, Wisconsin, and for a similar period held the office of principal of the Darlington, Wisconsin, schools and later was principal of the graded schools of Delavan, Wisconsin. In the meantime he had taken up the study of law and he completed his preparation for the bar in the office of Pitt Dewey, of Lancaster. In 1872 he was admitted to the bar and not long afterward started on horseback to find a promising location for a young attorney in the northwest. In June of that year he arrived in Sioux Falls and, being pleased with the prospects, decided to locate there. He formed a partnership with R. F. Pettigrew for the practice of law and the conduct of a real-eatate business and this association was continued with mutual pleasure and profit until 1876. In 1877, with George M. Smith, Colonel Grigsby established the Dakota Pantagraph at Sioux Falls, which, however, he sold in a few months. He and Mr. Smith also started the Bank of Egan at Egan, of which Colonel Grigsby was the first president, and the Union Bank at Elk Point, of which he also served as the first president.

The fitness of Colonel Grigsby for public office was early recognized by his fellow citizens and in 1883 at the first city election he was elected alderman from the third ward, which office he held for two terms. For one year he was clerk of the courts of Minnehaha county and in 1886 at the territorial congressional convention at Watertown he received almost enough votes for the nomination. In that same year he was elected to the territorial council and served in that capacity with marked ability. He was a delegate to the constitutional convention which met at Sioux Falls and thus had a part in the making of the organic law of the state. Until 1894 he supported the republican party but as he believed in the free coinage of silver he transferred his allegiance to the populist party in that year and was nominated for the state senate. Two years later he was the populist candidate for attorney general and campaigned the state for Bryan and free silver. He was not only elected but received more votes than any other candidate on the populist ticket in the state. He proved an efficient and conscientious official and made a record of which he has every reason to be proud. In 1912 he was a candidate for the United States senate.

Colonel Grigsby was serving as attorney general of South Dakota at the time of the sinking of the Maine and at once recognized the fact that this was almost certain to lead to war with Spain. He was very anxious to raise a regiment but knew that he would not be able to secure a commission in a volunteer regiment as Governor Lee, who by virtue of his office had the power of appointing all officers, was his bitter enemy. As Colonel Grigsby was thinking over the situation he saw a number of cowboys galloping up on their horses and it flashed upon him that the western cowboys would make unusually efficient soldiers. He at once telegraphed to President McKinley the following message: ‘The sinking of the Maine means war. In that event the cowboys of these western plains will make the best soldiers that can be secured on short notice. I tender my services in this connection.’ He watched very carefully the proceedings in congress and when he learned that a law providing for the formation of volunteer regiments for service in the Spanish-American war was about to be passed he went to Washington. On the night before his arrival in the capital the bill passed the house and was sent to the senate committee on military affairs. Colonel Grigsby secured a copy of the bill and wrote an amendment which authorized the raising of three regiments to be composed of men of special qualifications as to horsemanship and marksmanship, to be recruited from the nation at large and the officers thereof to be appointed by the president. He interviewed the Assistant Secretary of War Micklejohn, who said there was no use of trying to get the amendment added to the bill, and Assistant Secretary of the Navy, Theodore Roosevelt, who said that he would be very glad to help him get the amendment through but that he was so busy that it was impossible for him to do anything at that time. Colonel Grigsby then went to the senate and found that the committee on military affairs was in session. He explained the amendment to Senator Warren, who said that it was a good thing but that it would be impossible for it to be added as the committee would report the bill within twenty minutes. Colonel Grigsby, however, finally succeeded in getting the amendment called to the attention of the committee and when the bill was reported it contained the amendment exactly as it had been written by Colonel Grigsby. The bill passed the senate that day and was then sent back to the house, where it was passed without objection to the amendment. The following morning it was signed by the president and became a law. It was due to this amendment that Leonard Wood was appointed colonel and Theodore Roosevelt lieutenant colonel of the First Regiment of the United States Volunteer Calvary, Colonel Torrey colonel of the second regiment and our subject the colonel of the third. He at once began to recruit the regiment, which was mustered in on the 19th of May and left the next day for Chickamauga, where the training camp was situated.  They were popularly known as ‘Grigsby’s Cowboys.’ Colonel Grigsby was very popular with his men and by the time that they were called into active service they were a well drilled and efficient regiment. When they were mustered out he was presented with a beautiful sword by the other officers of the command. On the 2d of June Colonel Grigsby was appointed acting brigadier general and placed in charge of the First Calvary Brigade, First Army Corps, and during the entire summer he had about thirty-five hundred cavalrymen in training. He remained in the service until the 8th of September, 1899, when he was mustered out. When Colonel Grigsby became an officer in the United States Army Governor Andrew Lee asked for his resignation from the office of attorney general of South Dakota, which, however, he refused to give. The governor then requested that the United States officials discharge Colonel Grigsby from the army, maintaining that he could not legally hold both positions. The United States attorney general, however, ruled that the governor of South Dakota had nothing to say regarding the United States army and so Colonel Grigsby continued to hold both offices.

Colonel Grigsby was married in March, 1873, at Delavan, Wisconsin, to Miss Fannie L. Kingsbury, a sister of Hon. George W. Kingsbury, the author of the ‘History of Dakota Territory.’ To this union have been born four children: Sioux K., an attorney of Sioux Falls; George B., now mayor of Nome, Alaska; Fanny Lou, of Sioux Falls; and John T., familiarly known as ‘Jack,’ who is a practicing attorney of Flandreau, South Dakota.

The three regiments of Rough Riders which served in the Spanish-American war attracted a great deal of attention and proved unusually efficient soldiers and Colonel Grigsby takes justifiable pride in the fact that it was due to his efforts that their formation was possible. His service in the Civil war made him a valuable officer and as colonel of the Third Regiment of United States Volunteer Calvary and later as acting brigadier general of the First Calvary Brigade, First Army Corps, he rendered his country invaluable service. For many years he has been prominent in the affairs of the state of South Dakota and is leaving the impress of his individuality upon the history of the state.”

Colonel Melvin Grigsby lived to the age of 72 years and was buried on February 19th, 1917 in Block 15, Lot 6 of the Cemetery. He rests with his wife, Fannie; one son, Sioux; and other relatives.