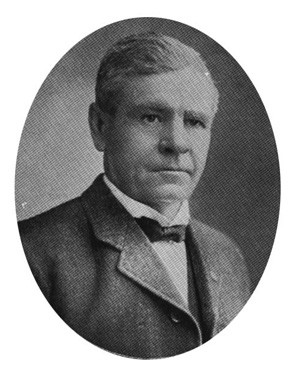 “Among all the citizens of Sioux Falls there are not more than half a dozen perhaps who were in the city at the time of the arrival of Thomas H. Brown, who since 1872 has continuously made his home in the city which is still the place of his residence, and throughout the entire period he has remained at the same location. Throughout all the intervening years to the present he has taken a most active part in the development and upbuilding of his section, actuated at all times by a public-spirited devotion to the community that has found tangible evidence in many practical and resultant efforts for the public good. In fact, he has left the deep impress of his individuality upon the material, intellectual, political and moral progress of the community, his influence ever being on the side of right, justice, truth and improvement. A native of England, he was born in Portabello, Durham county, on the 17th of August, 1837, and was a youth of eleven years, when, in 1848, he crossed the Atlantic to the United States, settling in Wisconsin. As his years and strength increased he became more and more active in business affairs, being identified with both farming and mining in the Badger state until 1861, when he responded to President Lincoln’s call for troops and enlisted for service in the Union army as a member of Company I, Third Wisconsin Infantry. With his regiment he proceeded to the front and participated in a number of hotly contested engagements which led to the final victory that crowned the Union arms. He remained with his command for three years and was honorably discharged in August, 1865, returning to his home with a most creditable military record.

Following the close of the war Mr. Brown went to Montana where he spent a year and a half in mining. He then returned to Wisconsin and was for some time engaged in the hardware business at Brodhead. It was about that time, or in 1867, that he married and in 1872 he removed with his wife to Sioux Falls, which was then a tiny hamlet upon the western frontier, the old fort being then in use, although a year later it was demolished. They occupied the first frame dwelling in Sioux Falls. It stood at the corner of Phillips avenue and Twelfth street, where the fine Brown apartments, in one of which Colonel Brown now resides, are to be seen. In the spring following his arrival Colonel Brown entered into partnership with B. F. Rodrick in the lumber business but after a year withdrew from that association and purchased a half interest in the business of Nye Phillips, a dealer in hardware, leather and drugs. This connection continued for five years and in the meantime Mr. Brown became recognized as one of the progressive, enterprising and reliable business men of the city. When the Northwestern Railroad Company was seeking to secure the right of way it employed Mr. Brown to purchase property and locate town sites, in which work he displayed marked skill and diplomacy. That he was farsighted and sagacious is indicated in the later development of the country following the building of the railroad and the development of the towns. In 1888 he purchased a job printing and book binding plant from Sam T. Clover and afterward purchased a printing outfit from the receiver of the Insurance Company of the Dakotas. On the 1st of May, 1889, he admitted Eugene Saenger to a partnership and thus the firm of Brown & Saenger came into existence. The development of the business since that time has been continuous and the firm today has the largest and most complete book-binding establishment in the state. Their plant is splendidly equipped and their trade has grown year by year, bringing a gratifying return to the owners, who have ever been recognized as most progressive and substantial business men. Colonel Brown has ever displayed marked ability in judging the value of a business situation or circumstance and, moreover, he has the power to coordinate seemingly diverse elements into a unified and harmonious whole.

In the year 1867 Colonel Brown was united in marriage to Miss Mary Morse, who has indeed been to him a faithful companion and helpmate on life’s journey. They have become parents of three sons. Marshall Brown, now residing in Sioux Falls, is a representative of the Mutual Benefit Life Insurance Company. He married Miss Eloise Ashley, of Lincoln county. He is a very prominent Mason, was the first Master of Unity Lodge and has been deputy grand master. Oscar A. Brown, the second son, living in Sioux Falls, married Miss Hattie Kincade and is the auditor of the McKenna Hospital, of which his father is the president. Harry T. Brown, the youngest son married Kate Gander, of Owatonna, Minnesota, where they now reside.

While he has made for himself a most creditable and enviable position in business circles, Colonel Brown ranks equally high in other connections. He has been and still is one of the most prominent Masons in the state. He organized the first Lodge in his county and served as its master for six years. Moreover, he was the first grand master of the Grand Lodge of Dakota territory and a few years later he was again chosen to that position of high honor while away from home. His entire life has been an exposition on the beneficent spirit and purpose of the craft. He has likewise taken an active interest in educational matters. He was the first chairman of the school board and the first president of the board of education and in office ever exercised his official prerogatives in support of progressive measures.

Colonel Brown took an active part in securing for Sioux Falls the Burlington, Cedar Rapids and Northern Railroad and has since served as one of its directors. His efforts for the material benefit and improvement of Sioux Falls have been far-reaching and beneficial. It was he who was instrumental in instituting the paving of the city and also establishing the new lighting system. Previous to that time Sioux Falls has poor roads and was badly lighted, but it is now illuminated with an arc light system that is thoroughly adequate. He was not only the strong active force in bringing about those improvements but also organized the Property Owners Association for the purpose of improving Phillips Avenue. A meeting was called and a committee on paving was appointed, of which Colonel Brown was made chairman. He made examinations all over the country before beginning the work and selected the kind of paving which he regarded as most desirable. This was the initial step in continued work of that character. Each avenue of the city followed the lead of Phillips avenue and organized for paving and other improvements, the work being carried on according to the theory that “those who pay should be the ones to say,” the kind of paving to be used. Many other interests have profited by the efforts, business enterprise and public spirit of Colonel Brown, whose worth to the city is widely acknowledged. His prominence as a citizen of the state is indicated in the fact that he was one of the commissioners of South Dakota at the World’s Columbian Exposition in Chicago in 1893 and served as executive officer of the commission, while Mrs. Brown acted as hostess at the South Dakota building during the progress of the fair.

Mrs. Brown, like her husband, has been a leader in many public activities. She is prominently known throughout South Dakota for her active work in the Eastern Star and in the Women’s Relief Corps, in both of which she has held high official positions. For fourteen years she was president of the Relief Corps and has taken great interest in the work of that organization; in fact, has been the most active woman in that line of work in the state. The corps of which she is a member is the largest in South Dakota and is the auxiliary to the largest post. She has been department president and grand matron and is now past grand matron and past department president. She has ever been a most gracious hostess, combining tact with kindliness and good cheer, and thus she has the faculty of placing all at ease in her presence. Both Colonel and Mrs. Brown have been most active citizens of South Dakota and there are no residents of Sioux Falls who are more widely or favorably known. They arrived in the city when it contained but a few white families. All around them stretched a broad and largely unsettled prairie and the most farsighted could not have dreamed of the changes that were soon to be wrought. With every movement that has had a beneficial effect upon the community and the upbuilding of their section of the state Colonel and Mrs. Brown have been identified and their reward has come to them in the high regard and esteem in which they are universally held, for there is no citizen of Sioux Falls or of that section of the state who is not proud to call them friends.”

Colonel Brown lived until 84 years of age and was buried on January 23, 1922. His wife, Mary, lived on until the age of 90 years and was buried on September 24, 1934. They rest in the family spaces in Block 16, Lot 9 of the Cemetery. This Lot is adjacent to that of Dr. Josiah L. Phillips and his family. The Brown Lot is also the resting place of Colonel Brown's mother, Isabela, along with two of his son’s, Marshall and Oscar, as well as an infant child and grandchild.