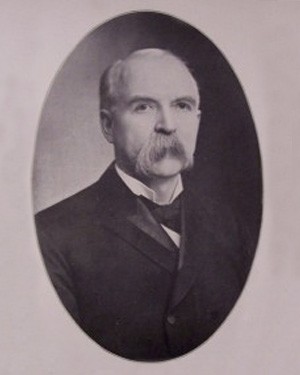 “Sioux Falls numbers among its most representative and valued citizens Daniel S. Glidden, who has been a resident of the city since 1878. During the intervening period his interests have extended to many fields touching closely the political and business growth of the community, so that he has taken an active part in the work of progress. He has been a power in the councils of the democratic party in his part of the territory and state and has held various positions of public trust and responsibility all of which he filled with credit and ability. He is now practically retired from active business.

Mr. Glidden was born in Clarendon, Orleans county, New York, February 24, 1844, and was reared upon a farm in that locality, attending the district schools during his childhood. He later completed his education at the Halley Academy and State Normal School at Brockport, New York, and afterward taught in that state for one term. In 1867 he removed to Anamosa, Iowa, and there engaged in teaching school during the following winter, afterward moving to Indian Town, where he was in charge of the public schools for four years. During the next four years he was interested in a mercantile business at Montour, Iowa, and at the same time had charge of the public schools of that community for four years.

In 1878 Mr. Glidden removed to Sioux Falls, South Dakota, and he is consequently one of the early settlers in this city, in the development and growth of which he has taken an active interest since that time. For five years after his arrival he engaged in the boot and shoe business, but later he resumed his political activities, becoming a member of the territorial executive committee of the democratic party and treasurer of the organization. In 1887 he was elected warden of the South Dakota penitentiary and he conducted that institution for two years, with credit to himself and the territory. Of late years Mr. Glidden has given his attention to the insurance business in Sioux Falls and has built up a large and representative patronage, winning an enviable place in business circles.

Mr. Glidden has been an active Mason for thirty-nine years and has held nearly every office in his lodge, chapter and commandery, being past master, past high priest and past commander. During the year 1887-8 he held the office of grand commander of the territory of Dakota. A wide reader and of broad and liberal views, he is regarded as one of the best informed men in the state and his discussion of any subject shows a cultured and well trained mind. These gifts make him very popular in social circles and during the period of his residence in Sioux Falls he has gained a wide and representative circle of friends. Sioux Falls is proud to number him among her citizens and he in return is proud of the achievements of the city which with he has allied his interests for thirty-six years.

In 1871 Mr. Glidden was united in marriage to Miss Josephine Martin, of Clarendon, New York, a daughter of Dan and Dorcas Martin, who were prominent citizens of that place. In the spring of 1885 Mr. and Mrs. Martin came to Sioux Falls and made their home with our subject and his wife until called to their final rest. Mrs. Glidden has been very active in connection with the public library and its development. Some thirty years ago a little band of ten started an association to organize a library, Mrs. Glidden becoming one of its charter members. For about fifteen years a small fee was charged and the library was cared for by volunteers from the ranks of the organizers. From this as a nucleus, the Carnegie Library today has grown and Mrs. Glidden has been actively connected with it throughout all these years in an official capacity, serving as a member of the board for many years and is still secretary. She is a member of the Women’s Study Club and was one of the charter members of The History Club, which was the first woman’s club organized in the territory of Dakota.”

Daniel Glidden lived to the age of 76 and was buried in May 1920. Josephine lived on until the following year, dying at the age of 76 years, and was buried on December 28, 1921. They rest in Block 11, Lot 12 of the Cemetery along with her parents, the Martins. It was Mrs. Glidden who bequeathed the funds to build the Glidden Memorial Chapel in the Cemetery in her husband’s memory.

Josephine, a renowned figure in her own right, was important in shaping the landscape of Sioux Falls.  In 1922, Josephine left a substantial gift to Sioux Falls College with the instructions that the money be used to construct a woman’s dormitory.  Glidden-Martin Hall, located at 15001 S Prairie Avenue on the University of Sioux Falls campus, is listed on the National Register of Historic Places.  The architectural firm of Perkins and McWayne, prominent architects of their time also credited with designing Sioux Falls YMCA, Farmers & Merchant Bank of Yankton, Bank of Brookings, and many WPA project throughout South Dakota, designed the dormitory.  The building, completed in 1929, is thought to be the last building in Sioux Falls constructed of sioux quartzite.