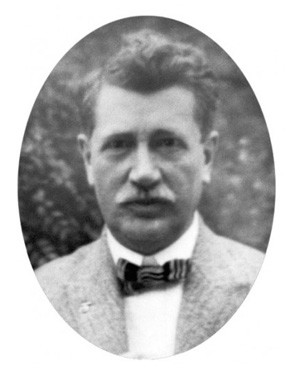 “Among those who have contributed in substantial measure to the commercial development of Sioux Falls is numbered Eugene Saenger, whose energy, enterprise and aggressiveness have been powerful factors in the building up of the bindery and office supply business controlled by the firm of Brown and Saenger, Incorporated. He was born in Freeport, Illinois, February 13, 1860, and is a son of Louis and Marie (Rach) Saenger, natives of Germany. The father fled from that country in 1848 and emigrated to America, where he remained only a short time. He then returned to Europe, going to Switzerland near the German border line, where he met his future wife, who crossed the border to meet him. They were married in Switzerland and went from there to America, locating at Freeport, Illinois, where both passed away on the same day.

Eugene Saenger acquired his education in the public schools of Freeport and in 1874 entered the office of the Freeport Journal, a daily and weekly newspaper. There he learned the bookbinder’s trade and followed it afterward in Freeport until the fall of 1881, when he moved to Cedar Rapids, where he was for eight years connected with the Republican Printing Company. On the first of May, 1889, Mr. Saenger moved to Sioux Falls, South Dakota, and, in association with Col. Thomas G. Brown, established a bindery and an office supply business under the name of Brown and Saenger. This continued as a copartnership until February 14, 1908, when Col. Brown retired, the business being incorporated as Brown and Saenger, Incorporated. At this time Joseph L. Elliott entered the firm as secretary and treasurer. Brown and Saenger, Incorporated, control a large and growing business in office supplies and their bindery is one of the largest in the city. The concern is conducted along modern business lines and has had a rapid and steady growth. Mr. Saenger has given practically his entire time and attention to its development and his success has placed him among the leading business men of Sioux Falls.

On the 30th of September, 1891, in Sioux Falls, Mr. Saenger was united in marriage to Miss Alice M. Richardson, a daughter of the late Benjamin W. and Mary C. Richardson, the former a captain of Company C, Eighty-first New York Volunteers, during the Civil War. Mr. and Mrs. Saenger have become the parents of a son, Ben, born March 20, 1893. Mr. Saenger gives his political allegiance to the republican party. He holds membership in the Dacotah and Country Clubs and is prominent in Masonry, having taken the thirty-second degree in the Scottish Rite. His course has at all times comformed to the highest business principles and his integrity, honesty and ability have gained him an enviable position in business circles.”

Eugene Saenger died at the age of 76 years and was buried on February 22, 1936. He rests with other members of the family in the Saenger-Richardson plot in block 13, lot 6 of the Cemetery.

We also wish to thank the folks at Brown & Saenger Corp. for use of the photos in this story. Please check out their website at www.brown-saenger.com.