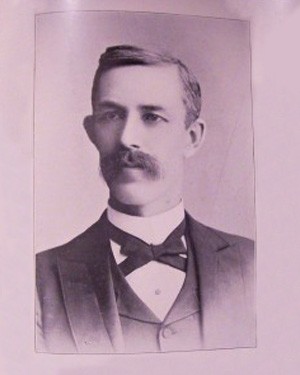 “In December, 1896, Sioux Falls was called upon to mourn the loss of one of her early residents, Frank L. Boyce – a man who left the impress of his ability, insight and public spirit upon the political, professional and social life of the city. He was one of the leading attorneys of Sioux Falls and had made his ability and ambition public assets through long and honorable public service.

He was born in Dane county, Wisconsin, March 7, 1854, and he spent his childhood there, working upon the home farm and attending district school. When he was fourteen years of age he entered the State University at Madison, Wisconsin, where he took a complete collegiate course, graduating in 1873 Immediately afterward he entered the law department of the university and received his degree in 1874. On the 20th of June of that year he was admitted to the bar by the supreme court of Wisconsin and immediately afterward entered the law office of Barker, Buell & Wait of Chicago, where he remained until September, 1875. He was then, upon examination by the supreme court, admitted to the practice of law in Illinois and engaged in professional work in Chicago until May, 1878.

At that time Mr. Boyce came to Sioux Falls on a visit and was so well pleased with Dakota and impressed with its future possibilities that he concluded to make this city his future home. He returned to Chicago and after finishing up his business there removed to Sioux Falls, where in the following October he opened a law office. In March, 1879, he formed a partnership with John Bippus under the firm name of Bippus & Boyce, an association which continued until August, 1881. Following this Mr. Boyce was alone in practice until late in the year 1883, when he admitted his brother, Jesse W. to a partnership, the firm being Boyce & Boyce. In the spring of 1884 the firm of Boyce, Noyes & Boyce was established and this continued until January, 1886, when T. W. Noyes removed to Washington, D. C. Following this the firm of Boyce & Boyce was reestablished and continued one of the leading law firms of the city.

Mr. Boyce was known as a most studious, painstaking and conservative lawyer and in his professional capacity was connected with many of the most important cases heard in the courts of the state. In addition to his professional prominence he was also well known in political affairs and was entrusted by his fellow citizens with various positions of responsibility. In 1879 he was elected secretary of the board of education and in 1883 was made alderman from the third ward. He was a capable and conscientious official and his political following grew rapidly. In 1894 he was elected senator from Minnehaha county upon the republican ticket and served in this capacity with credit and ability, being known as one of the most industrious members of the state assembly. He brought to the discharge of his duties careful and conscientious regard for the welfare of the state and a great deal of important legislation bears the stamp of his influence and activity.

During the summer of 1896 Mr. Boyce, being in ill health, went to his old home in Wisconsin in order to take a much needed rest for a few weeks. Instead of recuperating he became more enfeebled and on the 19th of December, 1896, he died at the home of his parents. His remains were brought to Sioux Falls and interred in Mount Pleasant cemetery. His death was widely and deeply mourned not only by the members of the legal fraternity and his official associates but by the many warm friends to whom his upright character had so greatly endeared him.”

Mr. Boyce is interred in Block 9, Lot 5 of the Cemetery, along with other members of his family.