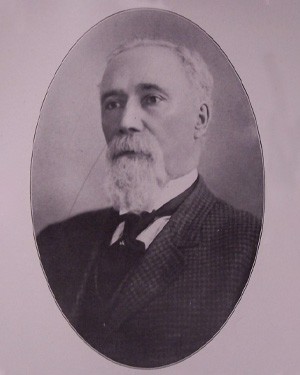 “John T. McKee, an enterprising agriculturalist residing on section 2, Sioux Falls township, is widely recognized as one of the worthy native sons and influential citizens of Minnehaha county, South Dakota. His birth occurred in Sioux Falls on the 17th of September, 1876, his parents being John and Ella (Brooks) McKee, the former being a native of Belfast, Ireland, and the latter of Dodge county, Wisconsin. The father, who learned the trade of a harness maker in the Emerald isle, emigrated to the United States in 1865 as a youth of eighteen years and stopped for a short time in New York City. Subsequently, he removed to Pennsylvania and in 1871 came to Sioux Falls, South Dakota, where in the fall of that year he embarked in the harness business in the old barracks building, where he was actively engaged in business until his death on the 2d of March, 1913, being at the time of his demise the oldest business man in the city. Just a year prior to his death Mr. McKee erected a new business structure on the site of the old barracks building and pulled up the old pump used in the barracks. He won a gratifying and well merited measure of success in his undertakings and acquired valuable city properties, also owning three hundred and twenty acres of farmland where our subject now lives. The period of his residence in Sioux Falls covered forty-two years and he enjoyed an enviable reputation as one of its leading business men and most respected citizens. He was one of the prominent Masons of the city and also an influential factor in local politics, his popularity and the trust imposed in him by his fellow citizens being indicated in the fact that he served as democratic county commissioner in this republican stronghold for about nine years.

It was in Sioux Falls that John McKee was united in marriage to Miss Ella Brooks, whose father was killed in a runaway when she was only four years old, and in 1870 she was brought to South Dakota by her mother and stepfather, William Howie, who settled in Sioux Falls. Here she grew to womanhood and by her marriage became the mother of four children, namely: Nellie, now the wife of Dr. Bowen, of Hartford, South Dakota; John T., of this review; Mayme, the wife of B. T. Stapleton, of Sioux Falls; and Anna, the wife of Wayne Webster, of the same city. The mother still lives in the old home at No. 503 South Dakota avenue, where as a bride she and her husband began housekeeping.

John T. McKee acquired his education in the public schools of his native city and also pursued a course of study in the Sioux Falls Business College. Subsequently he began the study of pharmacy but at the end of about a year in a Sioux Falls drug store was advised by the physician to obtain outdoor work. Accordingly he turned his attention to general agricultural pursuits and during the past eighteen years has cultivated a tract of land in Sioux Falls township, on section 2, which his father had acquired. Three years ago he came into possession of the southwest quarter of section 2, on which his residence and farm buildings stand. His undertakings as an agriculturalist have been attended with gratifying results, for he follows practical, modern methods in the work of the fields and annually gathers bounteous harvests.

On the first of June, 1898, Mr. McKee was united in marriage to Miss Cora Baldwin, of Hudson, Iowa, by whom he has two children, Roland and John. He gives his political allegiance to the democracy and has served as a member of the school board for several years, the cause of education ever finding in him a staunch champion. In religious faith he is an Episcopalian, and in the community where his entire life has been spent he is widely recognized as an upright, esteemed and representative citizen.”