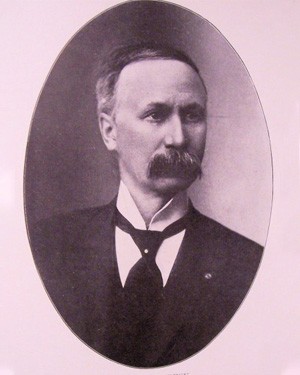 “One of the most venerated citizens of Sioux Falls, South Dakota, is Porter Pascal Peck, who has resided here for over thirty-two years and has been connected with many interests that have contributed toward the growth and advancement of the state. Mr. Peck lives now practically retired, looking after his extensive investments. Not only was he connected with commercial and financial interests of Sioux Falls but he served for two terms as its mayor and gave to the city a businesslike and effective administration.

Mr. Peck was born in Caledonia Springs, Canada, on the 16th of April, 1843. His parents were Hersa and Susannah (Southworth) Peck, the former born in Massachusetts and the latter in Middlebury, Vermont. The father was one of the early instructors in the Middlebury Academy and was a well known educator in the Green Mountain state. The parents removed to Canada in 1838 but in 1853 again crossed the border, settling in Kenosha, Wisconsin, where Mr. Peck was successfully engaged in the manufacture of brick through the remaining years of his life, passing to the Great Beyond in 1855. His widow survived him until 1897, in which year she died in Harvard, Illinois.

The educational opportunities of Porter P. Peck were not of the best, partly on account of the pioneer conditions prevailing in the districts in which the family resided and partly because of their various removals in his earlier youth. He began his education in the common schools of Canada and, removing with his parents to the state of Wisconsin when he was about ten years of age, continued to attend the common schools there until he had attained the age of about eighteen. His education was intermittent as during those years he assisted his father and was also employed in farm work.

On the first call for troops to defend the Union he loyally responded and enlisted in April, 1861, at Lake Geneva, Wisconsin, becoming a private in the Geneva Light Guards, which were attached as a company to the Fourth Wisconsin Infantry. He served with that command for three months and, showing a preference for the mounted service, enlisted in November, 1861, for three years in Company K, Second Wisconsin Volunteer Calvary, at the end of which he veteranized, continuing in active service until the close of the war. He received his honorable discharge in the fall of 1865. His regiment was one of the best known cavalry troops in the service and was at various times commanded by all of the celebrated cavalry leaders with the exception of General Pleasanton. At the close of the conflict it was under General Custer. It was first known as the Walworth Calvary and was assigned to Washburn’s Calvary but later became incorporated in the Twenty-second Wisconsin Calvary. In the spring of 1862 it was assigned to the Department of Missouri and soon thereafter assigned to the Army of the Frontier, with which the First Battalion, of which Mr. Peck was a member, remained until the fall of 1864. It was then transferred to the Military Division of the Mississippi. During the nearly three years of active service on the frontier Mr. Peck participated in all of the engagements of his command, the most notable being the battles at Prairie Grove, Arkansas, and at Springfield, Missouri. He also took part in the engagements of the Mississippi Division after being transferred thereto under General B. H. Grierson. In the spring of 1865 the regiment accepted the surrender of General N. B. Forrest, the noted Confederate cavalryman, at Grenada, Mississippi, and after paroling the prisoners the regiment returned to Memphis, Tennessee, from which point it embarked for Alexandria, where it joined the command of General George A. Custer for the march across the country to Texas. Just prior to this Mr. Peck was ordered with a detail to escort some prisoners to the Dry Tortugas and did not go to Texas with General Custer, on whose staff he had served for a short time. He was never seriously wounded nor taken prisoner and received his honorable discharge at New Orleans, August 12, 1865. His promotions were as follows: Sergeant, July 13, 1863; reenlisted as a veteran, February 26, 1864; second lieutenant, July 21, 1864; first lieutenant, February 4, 1865.

Shortly after his discharge Mr. Peck made his way to Dakota county, Minnesota, where he farmed for a time, and in 1867 settled in West Union, Iowa, where for two years he was engaged in the livery business, also giving his attention to agricultural pursuits. In 1872 he came to Sioux Falls, South Dakota, and being favorably impressed with its attractions and surroundings and wisely foreseeing its future growth although it was then but a small village, he decided to take up his residence here. He located definitely in the town early in the following year and established himself in the livery business, being one of the pioneers in that line. He continued active in that business until 1889 and met with a gratifying degree of success. He owned the first two-seated carriage in the state and also brought the first omnibus and the first landau to Sioux Falls. In 1878, in partnership with Col. Melvin Grigsby, he erected a substantial building opposite the Cataract Hotel, on Phillips avenue, and in its construction were utilized the first pressed brick, metallic cornice work and plate glass in the city. Mr. Peck has done much building in Sioux Falls and by his activity along this line has materially contributed to its progress and attractiveness.

A former biographer says of him: “He has also done his share in farming, having broken fourteen hundred acres of prairie land contiguous to the city. He is a man of great energy and force and has been identified with nearly all the public enterprises of the city. While in Iowa he was deputy sheriff for several years. The Dakota National Bank was organized through the efforts of Mr. Peck and his long-time friend and associate, Mr. Grigsby, and the former was its first cashier. He was a director and vice-president of the Minnehaha National Bank at the time of the death of its president, J. M. Bailey, Jr., and was subsequently elected president, holding this office until June, 1898.” He held this position for seven years, being elected in 1891. Mr. Pecks interests are wide and varied, not only covering the city but extending throughout the county and state. He now enjoys in retirement the fruits of a career rich in labor and also rich in gratifying results.

In Christiana, Minnesota, in March, 1866, Mr. Peck was united in marriage to Miss Alice C. Caskey, of Farmington, that state, who passed away on the 18th of November, 1875, being survived by three children: Ella M., who married B. F. Snook, of Mankato, Minnesota; Florence L., the wife of L. W. Wood; and Porter C. On the 2d of July, 1877, Mr. Peck married Miss Catherine W. Cornue, of Lynn, Wisconsin, and they have two sons, Harold C. and Clifford H. The former is a resident of Moline, Illinois and the latter received his college education in the famous Phillips-Exeter Academy of New Hampshire.

Mr. Peck is a staunch republican in politics, and he has always given his support to that party which upheld the Union during the dark days of civil warfare. He has interested himself in state, county and municipal politics and has been particularly prominent in the latter, serving as alderman and treasurer. In 1890 he was elected mayor and served by reelection for four years or two terms. Mr. Peck has always allied himself with interests that make for the public good and has on many occasions taken to the platform and expounded his views in convincing oratory. His administration as mayor was a path of obstacles to be overcome and a man of less self-reliance and determination would have given in to the deterring influences in his way. He never deviated, however, from the road which he considered right and always stood for progress and advancement. While he was mayor a number of important improvements were completed and a number of widely beneficial measures became law.  Under his administration the pros and cons fought for or against the prohibitory law and he had to contend with both factions in trying to guide to success measures which he considered of value. The position Mayor Peck took was never an equivocal one and it was always perceptible to all on which side of the question he stood. It cannot be said of him, as can be of so many politicians, that he was “straddling.” After he came to the conclusion of what was right or wrong he stood by his convictions honestly and openly, and his sturdy spirit of independence nearly always won the day. In his first election for mayor Mr. Peck defeated Captain W. E. Willey and in his second Rev. E. B. Meredith, the prominence of his defeated rivals being alone proof of his popularity. He is still an important factor in public affairs.

Mr. Peck affiliates with the Congregational church. Fraternally he stands high in the Masonic order, having attained the thirty-second degree in the Scottish Rite and he is also a Knight Templar and a Shriner. He is a member of Oriental Consistory, No. 1, and is identified with the Minnesota Commandery of St. Paul, Order of the Loyal Legion, which he joined in 1889. He keeps in touch with his comrades of the battlefields of yore through his membership in Joe Hooker Post, No. 10, G. A. R., of which for three years he was commander. Mr. Peck comes of an old American ancestry, although born in Canada. His paternal forebears were early settlers of Massachusetts and the maternal of Vermont. Like his ancestors he has shown himself to be a patriot in times of war and peace. He implanted the spirit of loyalty in the far west, to which land of promise he has contributed so much by his activities, and his name is worthy of being inscribed upon the honor roll of the builders of this state.”

Porter Pascal Peck was buried on February 1, 1923, in the family lot in Block 27 – Lot 12 of the cemetery. He lived to the age of 80 years. Also buried in the lot are his mother, both wives, and several children.