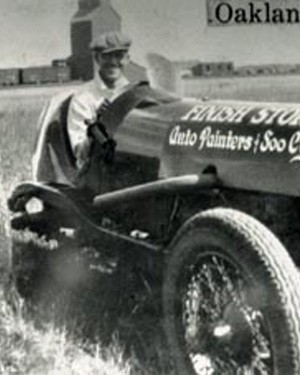 From the invention of the automobile, the thrill of driving was often accompanied by the excitement of driving fast. In those early days, young men probably challenged each other informally but by the end of WWI, the sport of auto racing had developed into organized events around the country. “Dirt track” racing events were held frequently, many times using old horse racing tracks. It was an extremely dangerous sport with many deaths occurring as the safety equipment for the drivers was nonexistent.

One of these early racers was Ray Herbert. His obituary states he was born in St. Louis in 1896. He served in the Army in WWI and lived for a time after that in the Sioux City area before coming to Sioux Falls. He had been a race car driver and mechanic for many years. In 1928, the Bourret Motor Company of Hawarden, Iowa hired Herbert to be in charge of their repair department. In a news release, they proudly announced that “Herbert has had fifteen years” experience as an auto mechanic, having been employed in the Lincoln service department, in Chicago, the Studebaker Service Station in Sioux City, the Mack Truck Branch in Sioux City, the White Motor Truck Company., and was a mechanic and driver for the Dusenberg racing team.” After coming to Sioux Falls he was employed as a mechanic by Edward Draeger at 104 W. 12th St. Herbert raced mainly in the upper Midwest in state and county fair events and acquired a nationally recognized name in the sport. As with many of his colleagues, he defied death once too often and during a race on July 30, 1933, in Peoria, Il his car, a Kinsey Special, went through the fence and down a 30-foot embankment, causing a fractured skull. He died two days later in a Peoria hospital, having never regained consciousness.

The car Ray was killed in was called the "Fronty Special"

Herbert's funeral was held at Miller Funeral Home on Friday, Aug. 4. He was a member of the Harold Mason American Legion Post and military rites were given along with members of the Post acting as pallbearers. He left behind his divorced wife and a child who were living in Sioux Falls at the time. He was 37 at the time of his death and was buried in spaces owned by his Uncle, John Gillman.